We help – typically large – organizations create one-click software delivery systems so that they can deliver software in a more rapid, reliable and repeatable manner (AKA Continuous Delivery). The only way this works is when Development works with Operations. As has been written elsewhere in this series, this means changing the hearts and minds of people because most organizations are used to working in ‘siloed’ environments. In this entry, I focus on implementation, by describing a real-world case study in which we have brought Continuous Delivery Operations to the Cloud consisting of a team of Systems and Software Engineers.

For years, we’ve helped customers in Continuous Integration and Testing so more of our work was with Developers and Testers. Several years ago, we hired a Sys Admin/Engineer/DBA who was passionate about automation. As a result of this, we began assembling multiple two-person “DevOps” teams consisting of a Software Engineer and a Systems Engineer both of whom being big-picture thinkers and not just “Developers” or “Sys Admins”. These days, we put together these targeted teams of Continuous Delivery and Cloud experts with hands-on experience as Software Engineers and Systems Engineers so that organizations can deliver software as quickly and as often as the business requires.

A couple of years ago we already had a few people in the company who were experimenting with using Cloud infrastructures so we thought this would be a great opportunity in providing cloud-based delivery solutions. In this case study, I cover a project we are currently working on for a large organization. It is a new Java-based web services project so we’ve been able to implement solutions using our recommended software delivery patterns rather than being constrained by legacy tools or decisions. However, as I note, we aren’t without constraints on this project. If I were you, I’d call “BS!” on any “case study” in which everything went flawlessly and assume it was an extremely small or a theoretical project in the author’s mind. This is the real deal. Enough said, on to the case study. 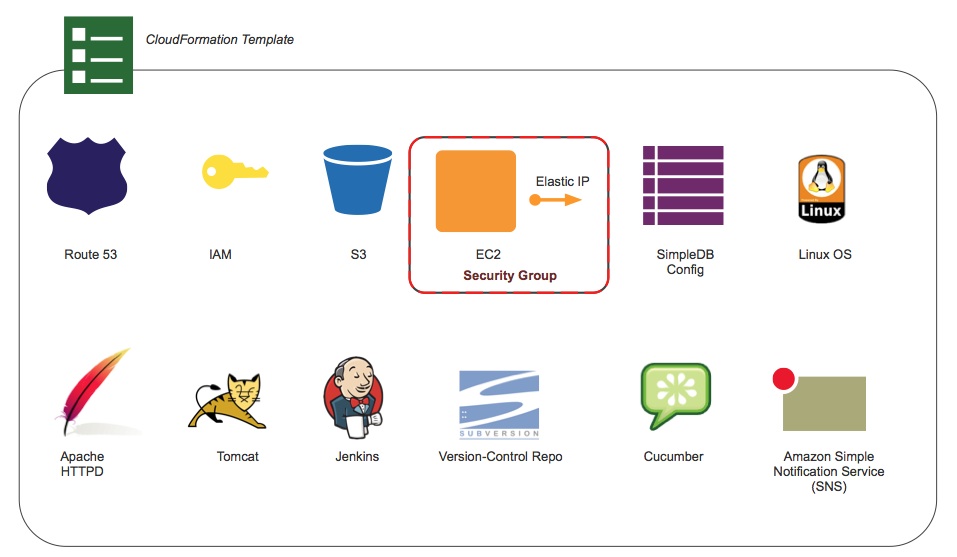 The Business Problem
The customer was used to dealing with long drawn-out processes with Operations teams that lacked agility. They were accustomed to submitting Word documents via email to an Operations teams, attending multiple meetings and getting their environments setup weeks or months later. We were compelled to develop a solution that reduced or eliminated these problems that are all too common in many large organizations (Note: each problem is identified as a letter and number, for example: P1, and referred to later):

Our Team
We put together a four-person team to create a solution for delivering software and managing the internal Systems Operations for this 100+ person project. We also hired a part-time Security expert. The team consists of two Systems Engineers and two Software Engineers focused on Continuous Delivery and the Cloud. One of the Software Engineers is the Solutions Architect/PM for our team.

Our Solution
We began with the end in mind based on the customer’s desire for unencumbered access to resources. To us, “unencumbered” did not mean without controls; it meant providing automated services over queued “request and wait for the Ops guy to fulfill the request” processes. Our approach is that every resource is in the cloud: Software as a Service (SaaS), Platform as a Service (PaaS) or Infrastructure as a Service (IaaS) to reduce operations costs (P10) and increase efficiency. In doing this, effectively all project resources are available on demand in the cloud. We have also automated the software delivery process to Development and Test environments and working on the process of one-click delivery to production. I’ve identified the problem we’re solving – from above – in parentheses (P1, P8, etc.). The solution includes:

Benefits
The benefits are primarily around removing the common bottlenecks from processes so that software can be delivered to users and team members more often. Also, we think our approach to providing on-demand services over queued-based requests increases agility and significantly reduces costs. Here are some of the benefits:

What we would do Differently
Typically, if we were start a Java-based project and recommend tools around testing, we might choose the following tools for testing, requirements and test management based on the particular need:

However, like most projects there are many stakeholders who have their preferred approach and tools they are familiar in using, the same way our team does. Overall, we are pleased with how things are going so far and the customer is happy with the infrastructure and approach that is in place at this time. I could probably do another case study on dealing with multiple SaaS vendors, but I will leave that for another post.

Summary
There’s much more I could have written about what we’re doing, but I hope this gives you a decent perspective of how we’ve implemented a DevOps philosophy with Continuous Delivery and the Cloud and how this has led our customer to more a service-based, unencumbered and agile environment.

Previous Post DevOps in the Cloud LiveLessons (Video)
Next Post NetFlix Unleashes Chaos Monkey – The First in its Simian Army
Our site uses cookies. By continuing to use our site you are agreeing to our privacy policy.OK