DevOps in the Cloud LiveLessons walks viewers through the process of putting together a complete continuous delivery platform for a working software application written in Ruby on Rails along with examples in other development platforms such as Grails and Java on the companion website. These applications are deployed to Amazon Web Services (AWS), which is an infrastructure as a service, commonly referred to as “the cloud”. Paul M. Duvall goes through the pieces that make up this platform including infrastructure and environments, continuous integration, build and deployment scripting, testing and database. Also, viewers will learn configuration management and collaboration practices and techniques along with what those nascent terms known as DevOps, continuous delivery and continuous deployment are all about. Finally, since this LiveLesson focuses on deploying to the cloud, viewers will learn the ins and outs of many of the services that make up the AWS cloud infrastructure. DevOps in the Cloud LiveLessons includes contributions by Brian Jakovich, who is a Continuous Delivery Engineer at Stelligent. 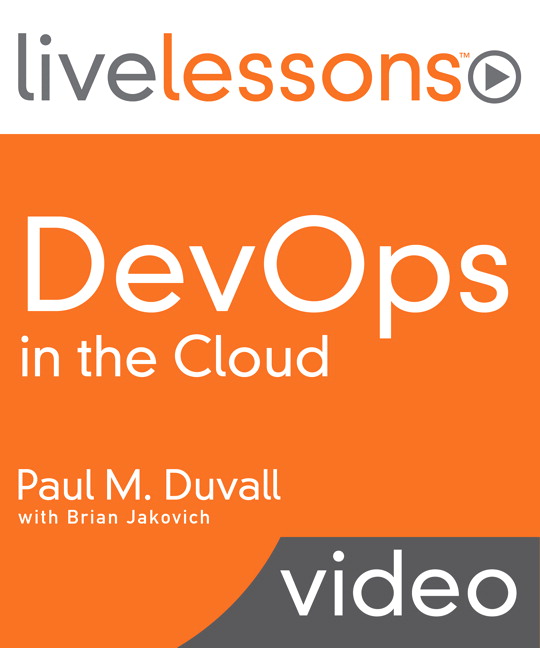 Visit www.devopscloud.com to download the complete continuous delivery platform examples that are used in these LiveLessons.
Lesson 1:
Deploying a Working Software Application to the Cloud provides a high-level introduction to all parts of the Continuous Delivery system in the Cloud. In this lesson, you’ll be introduced to deploying a working software application into the cloud.
Lesson 2:
DevOps, Continuous Delivery, Continuous Deployment and the Cloud covers how to define motivations and differentiators around Continuous Delivery, DevOps, Continuous Deployment and the Cloud. The lesson also covers diagramming software delivery using spaghetti diagrams and value-stream maps.
Lesson 3:
Amazon Web Services covers the basics of the leading Infrastructure as a Service provider. You’ll learn how to use the AWS Management Console, launch and interact with Elastic Compute Cloud (EC2) instances, define security groups to control access to EC2 instances, set up an elastic load balancer to distribute load across EC2 instances, set up Auto Scaling, and monitor resource usage with CloudWatch.
Lesson 4:
Continuous Integration shows how to set up a Continuous Integration (CI) environment, which is the first step to Continuous Integration, Continuous Delivery and Continuous Deployment.
Lesson 5:
Infrastructure Automation covers how to fully script an infrastructure so that you can recreate any environment at any time utilizing AWS CloudFormation and the infrastructure automation tool, Puppet. You’ll also learn about the “Chaos Monkey” tool made popular by NetFlix – a tool that randomly and automatically terminates instances.
Lesson 6:
Building and Deploying Software teaches the basics of building and deploying a software application. You’ll learn how to create and run a scripted build, create and run a scripted deployment in Capistrano, manage dependent libraries using the Bundler and an Amazon S3-backed repository, and deploy the software to various target environments including production using the Jenkins CI server. You will also learn how anyone on the team can use Jenkins to perform self-service deployments on demand.
Lesson 7:
Configuration Management covers the best approaches to versioning everything in a way where you have a single source of truth and can look at the software system and everything it takes to create the software as a holistic unit. You’ll learn how to work from the canonical version, version configurations, set up a dynamic configuration management database that reduces the repetition, and develop collective ownership of all artifacts.
Lesson 8:
Database, covers how to entirely script a database, upgrade and downgrade a database, use a database sandbox to isolate changes from other developers and finally, to version all database changes so that they can run as part of a Continuous Delivery system.
Lesson 9:
Testing, covers the basics of writing and running various tests as part of a Continuous Integration process. You’ll learn how to write simple unit tests that will run fast tests at the code level, infrastructure tests, and deployment tests – sometimes called smoke tests. You will also learn how to get feedback on the test results from the CI system.
Lesson 10:
Delivery Pipeline demonstrates how to use the Build Pipeline plug-in in Jenkins to create a delivery pipeline for the commit, acceptance, load & performance and Production stages so that software can potentially be delivered to users with every change.